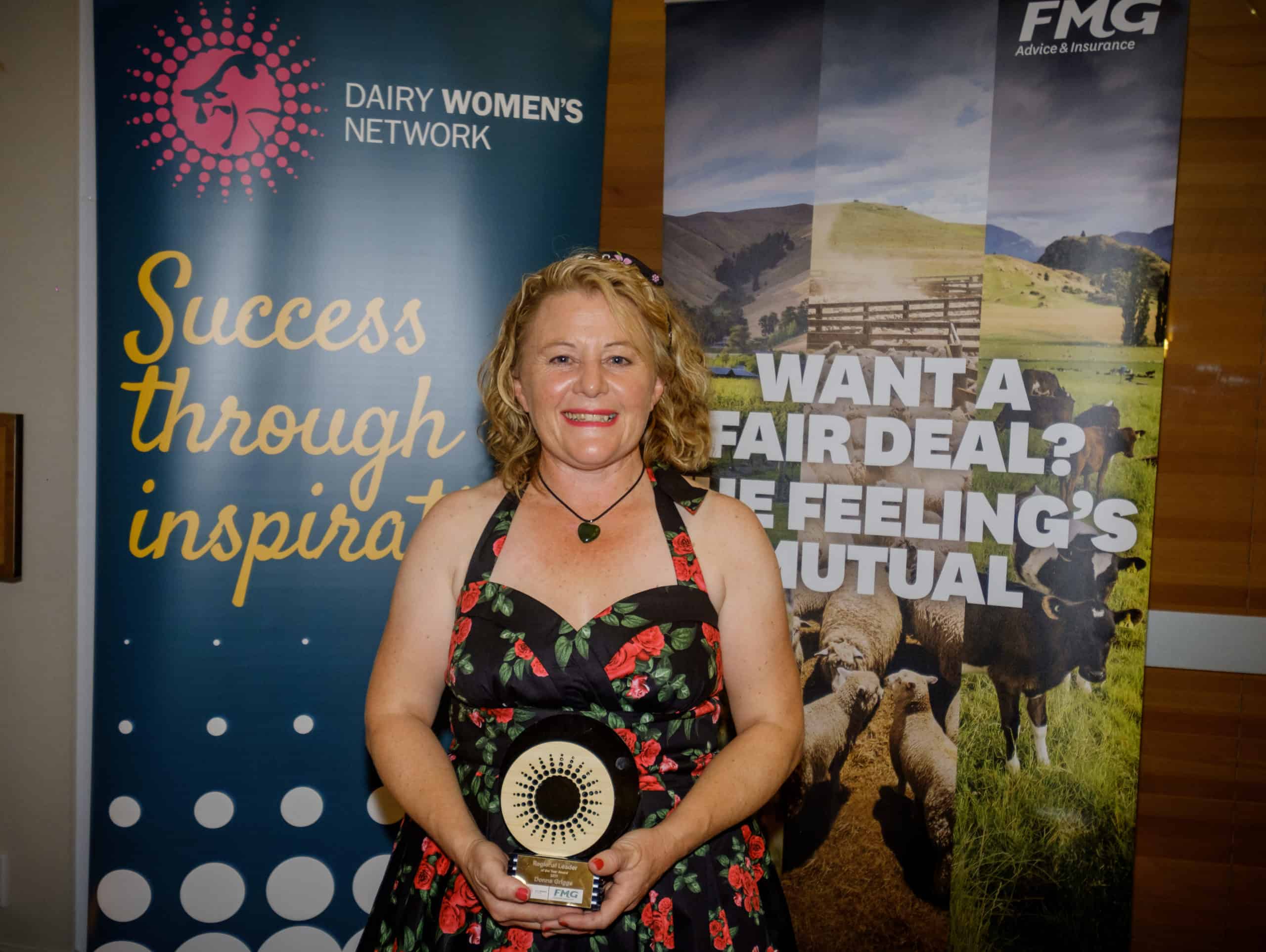 The award, which celebrates the grassroots work of Dairy Women’s Network Regional Leaders across the country, was announced at tonight’s gala dinner following the Allflex and DWN2021 Step Up Together Conference in Taupo.

The other finalist this year was Rebecca Green, a dairy farmer from Cheviot, North Canterbury.

“Our Regional Leaders are at the core of our organisation. Recognising and supporting their efforts is so important to the morale of the team and the longevity of our Network,” said Dairy Women’s Network Chief Executive Jules Benton.

“Both our finalists show a real passion for people and work to strengthen the dairy industry through connection not only between farmers but at a social and community level as well. Donna and Rebecca were noted by the judges as having strong value foundations and for helping people to find their place within the industry, which will ultimately help our sector to thrive.”

Griggs said she was “humbled” to be nominated for the award, which means “representing all of the Dairy Women’s Network leaders in New Zealand as a whole.”

“For me, the title means an opportunity to grow in leadership skills and to bring that knowledge forward into the Dairy Women’s Network community, our farming community, and our business.”

Griggs has been heavily involved in her community for over a decade, working for and leading fundraising committees, the Waipu Playcentre and the local school’s parent-teacher association while her children were attending.

With three adult children having left the farm, and three teenagers, Griggs now focuses on 50/50 sharemilking 900 cows on the Ruawai Flats with her husband, and volunteers as Regional Leader and Coast to Coast Business Group Leader for Dairy Women’s Network.

She also hosts DairyNZ discussion groups on their farm and organises industry workshops for local farm teams to build their knowledge.

Griggs strives to support and encourage the wellbeing of others, which was noted by this year’s award supporter FMG.

“On behalf of the FMG team congratulations to Donna for achieving the Regional Leader of the Year Award. FMG proudly supported this award recognising the importance of feeling connected within your community as a strong link to wellbeing and Donna’s work in this area is exemplary,” said FMG’s Chief Client Officer Andrea Brunner.

As the 2021 Regional Leader of the Year Griggs receives registration to the Dare to Lead™ Programme facilitated by Kaila Colbin from Boma New Zealand, as well as accommodation and travel to the location of the programme, to help her on her leadership journey.

Photo: Supplied; Dairy Women’s Network Regional Leader of the Year recipient Donna Griggs is humbled to represent her fellow Regional Leaders from around the country.

Enthusiasm for a digital future key asset for Dairy Women’s trustee role
0
1st July 2019 Enthusiasm for a digital future is a key asset Auckland based tech enthusiast Sophie Stanley feels she...
DWN stories to be shared by new media partner
0
Dairy Women’s Network are reaching out to dairy women across the country through a new partnership with national media body...